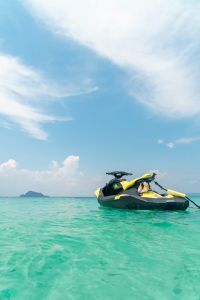 The fact that Honda ceased selling the unmarked personal watercraft systems did not free Arctic Cat from the notice requirement of Section 287. According to the court, Section 287 is not “temporally limited” and “prohibits a patentee from receiving any damages in a subsequent action for infringement after a failure to mark, rather than merely a reduced amount of damages in proportion to the amount of time the patentee was actually practicing the asserted patent.”[11] Once a patentee starts making or selling a patented product, the notice requirement under Section 287 is not satisfied until the patentee provides actual notice (charge of infringement) or constructive notice (marking its products).[12] The notice requirement does not simply vanish with the cessation of making or selling the unmarked product. Furthermore, the court rejected Arctic Cat’s argument that the finding of willful infringement by Bombardier was sufficient to establish notice because actual notice is determined by the conduct of the patentee rather than the knowledge of the infringer.[13]

The court’s decision in Arctic Cat highlights the underlying purpose of Section 287. In holding that Arctic Cat could not recover damages for infringement occurring after the sale of unmarked products ceased but before an infringement suit was filed against Bombardier, the court stressed that Section 287 is intended to “encourage marking, not merely discourage the sale of unmarked products.”[14] Arctic Cat’s failure to both reconcile noncompliance and provide notice cost it its pre-filing damages.

It is important to learn from Arctic Cat’s mistake and ensure that you mark your patented products so that you can reap the maximum amount of damages should infringement thereof be determined!