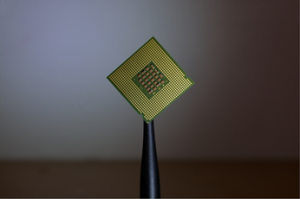 Qualcomm holds patent portfolios for many stand essential patents (SEPs) for cellular technology found in most smartphone devices including 4G standards. A large portion of Qualcomm’s business involves licensing the patents to original equipment manufacturers (OEMs) like cellphone manufacturers. To maximize revenue, Qualcomm only licenses to the OEMs instead of chip suppliers to prevent patent exhaustion.[2] Additionally, Qualcomm also manufactures and sells cellular modern chips required to practice the technology standards to OEMs. OEMs must follow a “no license, no chips” policy by Qualcomm because Qualcomm refuses sell its chips if the OEMs do not have a license.

Although, the court ruled in favor of Qualcomm under antitrust, Qualcomm might be facing future patent exhaustion problems.[6] Patent exhaustion can occur when any licensed manufactured product is sold. The patent is exhausted for the sold product and the patent owner is then unable to sue for infringement. Patent exhaust occurs for all downstream purchases of the patented product. In this case, if Qualcomm had licensed the chip manufacturers, the patent would be exhausted when the chip manufacturer sold the patent chips to the OEMs. Therefore in this scenario, Qualcomm could not assert its patent against OEMs who did not license their products. Qualcomm’s business strategy attempts to avoid this pitfall and require the license to the OEMs themselves.

The Ninth Circuit opinion found Qualcomm’s business strategy valid. However, the problem occurs because Qualcomm might be giving the chip manufacturers a legal license. The Ninth Circuit also wrote that the “’CDMA ASIC Agreements’ functionally act as de facto licenses.”[7] Although, the “CDMA ASIC Agreements” appear like a covenant not to sue, in recent years, courts have found little distinguishing differences between a covenant not to sue and a license. In Ortho Pharm. Corp. v. Genetics Institute, Inc., the court stated “A license may amount to no more than a covenant by the patentee not to sue the licensee for making, using or selling the patented invention.”[8] If the chip manufacturers have a valid license, then the OEMs can use and purchase those chips without having to pay any royalties to Qualcomm because the patent would be exhausted. The Ninth Circuit only dealt with antitrust issues, but the patent exhaustion issue might be a topic for the future.

Currently, Qualcomm has won a victory for their practices in the Ninth Circuit. The Ninth Circuit has already declined to rehear the case, but the FTC still have the option to appeal to the Supreme Court.