How Does Copyright Protect Tattoos and Graffiti as Embedded Works

Tattoos and graffiti are not quite the symbols of rebellion they once were. Now they have become an important part of street culture in America and enjoy greater popularity than ever before. It is now generally understood that tattoos and graffiti are also copyrightable work when they show original expression. However, tattoos and graffiti share one feature that distinguishes them from other types of art—they have to be in physical connection to certain substances, i.e., human skin or building surface, to fully present their artistic expression. This feature raises a legal question in practice: do tattoos and graffiti enjoy standalone copyright protection when displayed adjacently with other objects? 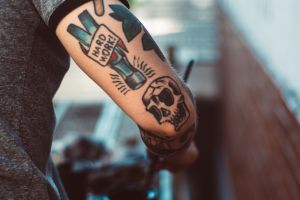 Which One Is Copied? The Tattoo or the Person?

The recent Solid Oak case[1] from New York catches a lot of basketball and video game lovers’ attention. Several National Basketball Association (“NBA”) stars, including LeBron James, are involved in this case. This time however, it is not the players themselves, but their tattoos that have become a central issue.

The defendants, 2K Games, Inc. and Take-Two Interactive Software, Inc. (hereinafter collectively as “Take-Two”), are the developers of the video game series NBA 2K. The basketball simulation game features lifelike depictions of NBA players and their tattoos.[2] In 2016, the plaintiff, Solid Oak Sketches, LLC (“Solid Oak”), alleged that Take-Two infringed its copyrights of the depicted tattoos. Take-Two then moved for summary judgment on the ground of de minimum use and fair use, and thus to dismiss the plaintiff’s claim.[3]

The central inquiry was whether Solid Oak could exclude Take-Two from using the tattoos in the game. Solid Oak is a tattoo licensing company that purchases copyrights from independent tattooists. In this case, Solid Oak holds an exclusive license to each of the disputed tattoos, yet it is not licensed to apply the tattoos to a person’s skin. Neither does Solid Oak hold any trademark or publicity rights to the NBA player’s likeness.[4]

The NBA 2K game includes many realistic components to provide an accurate simulation of an actual NBA game. The tattoos are thus included to “depict the physical likenesses of the real-world basketball players as realistically as possible.”[6] However, these tattoos are not always clearly seen by game users. The game sets a distant camera angle that renders the tattoos at a relatively smaller size than in the real world. Also, the tattoos are further obscured by a player’s quick movements in the game, making them less noticeable by a game user.[7]

After examining Take-Two’s evidence and the expert testimonies, the court found that the use of the disputed tattoos is de minimis. The tattoos will appear only after a user chooses three certain players from over 400 available options. Also, in the game they are so small and distorted that they often appear out-of-notice to the average game users. Therefore, Take-Two’s use of the tattoos falls below the quantitative threshold of substantial similarity.[8]

Furthermore, the court also found an implied license for Take-Two to use the tattoos in the game as a part of the player’s likeness. The tattooists who created the work testified that they implicitly allowed the NBA players to copy and distribute the tattoos as elements of their likenesses, as they knew that the players were likely to appear in public and various forms of media. Then, the license to use such likenesses was passed from the players to the NBA, then to Take-Two. The court thus found no copyright infringement.[9]

Lastly, the court acknowledged Take-Two’s inclusion of the tattoos is permissible as fair use. Even though the purpose of using the tattoos is to increase the commercial value of the game, the tattoos are incidental to such value because consumers do not buy the game for the tattoos. The commercial use is also undermined by the factual rather than expressive nature of the tattoos. The tattooists admitted that they did not intend much creativeness in the designs, but rather copied common tattoo motifs or pre-published materials.[10] Besides, even though the tattoos were copied in the whole, their size is so reduced that the visual impact of their artistic expression is significantly limited.[11] It is unlikely such use of Solid Oak’s tattoos can serve as a substitute in the tattoo market.[12]

The Solid Oak decision provides some guidance for commercial use of a celebrity’s likeness when that celebrity’s tattoos are likely to be displayed along. However, this case does not address the protectability of tattoos per se, because it views the tattoos as part of the celebrity’s likeness. It remains an open question when and how we should separate a person’s tattoo from his likeness in a copyright infringement discussion.

Is a Piece of Graffiti “Part of” an Architectural Design? 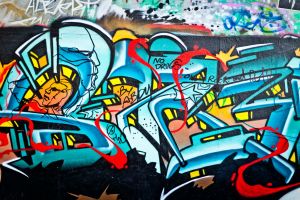 On the other hand, a case from California, another robust market for artists, reviewed the “part of” inquiry in a different context. The Falkner[13] case from 2018 involves an automobile advertisement photograph featuring a street artist’s mural (graffiti) work in a parking garage. The defendant, General Motors LLC, used this photo in its social media campaign. Later on, the mural’s creator Adrian Falkner (also known as “Smash 137”) sued General Motors for copyright infringement, and General Motors moved for summary judgment to dismiss the case.

The core issue of the infringement claim was whether Falkner’s mural is an “architectural work” under section 102 of the Copyright Act[14] to trigger a section 120 exemption. Section 120 of the Copyright Act[15] permits pictorial representations of an architectural work, such as taking photos or painting images of a building. General Motors argued that the section 120 exemption applies to Falkner’s mural because it is “incorporated into a building.”[16] However, by comparing the instant case to a precedent that involves visual depictions of streetwall towers in a movie, the court reached an opposite conclusion.

The instructive case that the court looked at is Leicester v. Warner Bros.[17] The case arose from a superhero movie Batman Forever, which features the 801 Tower in downtown Los Angeles and four towers that form its streetwall. An artist Andrew Leicester registered the towers along with his other works in an adjacent courtyard space for copyright as a sculptural work, naming it Zanja Madre.[18] Leicester argued that Zanja Madra should be viewed as an independent protectable work apart from the 801 Tower, and thus the section 120 exemption does not extend to Zanja Madre.[19] However, the Leicester court found that the streetwall towers, even though physically separate, serve majorly a functional purpose to extend the property line under a municipal requirement.[20] Thus, the streetwall towers are so incorporated into the overall architectural structure that they are subject to the section 120 exemption.

Yet, the Falkner court did not stop at the Leicester conclusion. It closely examined the facts from two cases to decide whether a mural/graffiti is “part of” an architectural work for the purpose of section 120. The court found several distinctions in the instant case from Leicester. First, the streetwall towers in Leicester incorporated a few decorative features that matched the 801 Tower, as an architectural element mandated by the state’s development agency.[21] On the other hand, the Falkner mural is conceptually separated from the parking garage, and it is commissioned with complete creative freedom.[22] Second, the Leicester streetwall towers serve the functional purpose of channeling traffic into the courtyard as metal gates,[23] while Falkner was not given any functional instructions when creating the mural.[24] Accordingly, the Falkner court found a lack of relevant connection between the mural and the garage to characterize the art piece as “part of” the architectural work. Therefore, General Motors failed their section 120 argument, and their motion for summary judgment was denied.[25]

As street culture continues to thrive in urban centers, it is possible that we will see more cases from federal courts addressing the emerging topic of tattoos and graffiti. At least for now, artists, especially those who are fond of realistic works, should be cautious about depicting other copyrightable materials in their creations, no matter whether those are the main focus or not.