On October 13, 2020, the Supreme Court granted three petitions for writs of certiorari related to a Federal Circuit decision in the 2019 case Arthrex, Inc. v. Smith & Nephew, Inc.[1] On the surface, the case involves questions of administrative and constitutional law, but the outcome of the case could have significant impact on the world of patents. 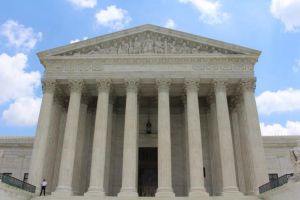 The Supreme Court’s grant was for two specific issues:

(1) whether, for purposes of the Constitution’s appointments clause, administrative patent judges (APJs) of the U.S. Patent and Trademark Office (USPTO) and Patent Trial and Appeal Board (PTAB) are principal officers who must be appointed by the President with the Senate’s advice and consent, or inferior officers whose appointment Congress has permissibly vested in a department head; and

(2) whether, if APJs are principal officers, the court of appeals properly cured any appointments clause defect in the current statutory scheme prospectively by severing the application of 5 U.S.C. § 7513(s) to those judges.[2]

The controversial 2019 decision by the Federal Circuit concluded that APJs are principal officers who must be appointed by the President, with the advice and consent of the Senate, under the Appointments Clause of the Constitution.[3] In analyzing the question of whether APJs were principal or inferior officers, the Federal Circuit ultimately assessed three factors: how the work of APJs was reviewed, how APJs were otherwise supervised, and how APJs could be removed from office.[4] Generally speaking, the more control, review, and direction over the work and role of a given officer that can be demonstrated, the more likely that officer will be found to be an inferior officer. The Federal Circuit determined that the first and third factors weighed in favor of categorizing APJs as principal officers, whereas the second factor pointed towards categorizing them as inferior officers. Thus, on balance, the Federal Circuit concluded APJs were principal officers and that the then-current statutory scheme of the Secretary of Commerce appointing APJs to the PTAB was unconstitutional.[5]

As a remedy for the finding, the Federal Circuit vacated the PTAB’s underlying Arthrex decision, remanded for a new hearing, directed designation of a new panel of APJs to hear the PTAB proceeding, and severed the portion of the Leahy-Smith America Invents Act (AIA) that provided removal protections to APJs.[6] By severing that portion, the Federal Circuit held that APJs were now inferior officers and could continue performing their role without violating the Appointments Clause.[7] In addition to the underlying Arthrex decision, the Federal Circuit vacated more than 100 other PTAB decisions that predated the Arthrex decision and in which the Appointments Clause challenge was properly preserved.[8]

Both parties in Arthrex petitioned for an en banc rehearing by the Federal Circuit, but the petition was denied on March 23, 2020.[9] In response, the chief APJ issued an order on May 1, 2020 holding all impacted cases to be held in administrative abeyance until the Supreme Court either granted or denied certiorari on Arthrex.[10]

The Supreme Court could ultimately decide that the statutory framework for appointing APJs prior to the Federal Circuit’s Arthrex decision was constitutional or that the Federal Circuit’s remedy for an unconstitutional framework is sufficient, either of which would result in a narrow decision. However, the Supreme Court could find that APJs are not constitutionally appointed and that the Federal Circuit’s solution is insufficient to cure the problem(s), resulting in a far wider-reaching decision that could potentially reap chaos on the patent world. Though the full extent of such a possibility is not well defined given the amount of uncertainty that pervades, short of Congressional intervention in that scenario, such a decision could open a “floodgate of challenges” to the constitutionality of any of the decisions by the PTAB dating back to its creation.[11] A date has not been set for oral arguments before the Court, but this case stands to be an important one to watch for patent owners, patent challengers, and the broader world of patents.