On October 7, 2020, Google and Oracle finally had their day at the Supreme Court after a decade-long legal battle between the two tech giants. The issues before the eight-justice Supreme Court were:

(1) whether copyright protection extended to a software interface; and

(2) whether, as a jury found, the petitioner’s (Google) use of a software interface in the context of creating a new computer program constituted fair use.[1] 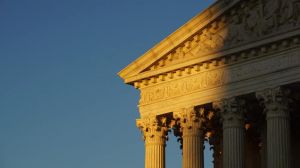 To understand how the companies found themselves arguing before the highest court in the land, it is useful to review the history of these legal proceedings.

How We Got Here

Oracle’s copyright infringement allegations stem from Google’s decision in the mid-2000s to re-implement the Java programming language for use in its then-upcoming Android platform rather than create a new programming language from scratch.[2] The decision was practical; Java was already widely known and used, so re-implementing it would allow “thousands of existing Java programmers to become Android developers without having to learn a new language.”[3] However, the re-implementation used the same names, organization, and functionality as some of Java’s application programming interfaces (APIs). An API is a collection of well-defined interactions in software programming that allow programmers to “build without having to reinvent the wheel.”[4]

In a lawsuit filed in 2010 in the Northern District of California, Oracle alleged copyright infringement against Google for copying 37 Java APIs, or about 11,500 lines of code out of Android’s estimated 12 million lines of code.[5] Two separate legal points were at issue: (1), whether the APIs were copyrightable; and (2), whether Google’s use was a fair use. The judge in the case ruled as a matter of law that APIs were not covered by copyright. He noted that, “when there is only one way to write something, the merger doctrine bars anyone from claiming exclusive copyright ownership of that expression. Therefore, there can be no copyright violation in using the identical declarations.”[6] The jury hung on the question of fair use.

Oracle then appealed the decision to the Federal Circuit, which in 2014 reversed the district court’s finding and held that Java APIs were copyrightable, but left open the possibility of a fair use defense for Google.[7] The case then returned to the district court for a trial on Google’s fair use defense, and in 2016 a jury unanimously agreed that Google’s use of the Java APIs was fair use. Oracle then filed another appeal, and in 2018 the Federal Circuit rejected the jury’s verdict and ruled that Google’s use was not fair use as a matter of law.[8] In January 2019, Google filed another petition asking the Supreme Court to review both of the Federal Circuit decisions, and in November 2019 the Court granted Google’s petition.[9]

One of Google’s primary goals in oral arguments was to demonstrate to the justices that there was something different about APIs as opposed to other computer code and that that difference was of legal significance. However, court observers noted that at least four justices—Alito, Gorsuch, Kavanaugh, and Thomas—expressed skepticism at Google’s position that APIs could not be copyrighted.[10] Those justices seemed far more amenable to Oracle’s position that APIs are no different than any other computer code, and therefore subject to copyright.

It is important to note here that for decades, it had been assumed in the industry that APIs were not subject to copyright.[11] It was taken for granted that competing companies could make use of each other’s software in order to enable products to work with each other and to propel the industry forward. For example, Oracle’s MySQL language was created as an iteration of IBM’s SQL and Oracle re-implemented Amazon’s S3 API for cloud services so customers who built software for Amazon’s cloud platform could easily switch to Oracle’s rival cloud platform.[12] A finding for Oracle could upend this foundational assumption that has existed at the core of the industry and supported its growth and development.

Justice Sotomayor noted that prevailing belief within the industry and that it did not seem sensible to upend it now. Oracle disputed the justice’s statement, noting that there has never been a case that has explicitly stated a difference between code that is copyrightable and code that is not.[13]

There was also the issue of whether or not Google’s use of the API was fair use. This issue could end up being resolved on procedural grounds, rather than an adjudication of whether Google’s use actually constituted fair use. Traditionally, factual questions are supposed to be decided by juries, not judges. Google argued that an evaluation of fair use is sufficiently fact-intensive and that the Federal Circuit should not have overturned the jury’s verdict. Several justices seemed open to this line of argument.[14]

Additionally, over 50 amici briefs have been filed in the case. Such industry giants as Microsoft, IBM, and Mozilla support Google, while Oracle has the amici support of the U.S. government, several former industry executives, and a broad range of copyright owner associations and professors of law, among others.[15]

If all four of those justices who expressed skepticism at Google’s argument that APIs were not copyrightable voted for Oracle, the best Google could hope for is a tie. A tie would still technically be a loss for Google as it would leave in place Oracle’s win at the appellate level, but it would not set a national precedent that APIs are copyrightable. If five or more justices side with Oracle on the issue of API copyrightability, then the country has a new precedent that could cause seismic shifts in how the industry operates.

Another possible outcome could be a narrow procedural win for Google on the issue of the Federal Circuit throwing out the jury’s finding of fair use. Such a ruling would permit the Court to skirt around the issue of API copyrightability entirely, kicking the case back down for further litigation. It remains to be seen whether the Court will rule on both issues or just one, for Oracle or for Google, but the software industry and copyright scholars alike await the Court’s decision with bated breath.

[10] Lee, Google’s Supreme Court faceoff with Oracle was a disaster for Google, https://arstechnica.com/tech-policy/2020/10/googles-supreme-court-faceoff-with-oracle-was-a-disaster-for-google/.

[13] Lee, Google’s Supreme Court faceoff with Oracle was a disaster for Google, https://arstechnica.com/tech-policy/2020/10/googles-supreme-court-faceoff-with-oracle-was-a-disaster-for-google/.