What is Copyrighted in a Video Game?

Video games are a combination of many ideas, expressions, rules, and systems. Copyright, to put simply, only protects the expression of ideas, not the ideas themselves. For instance, the idea of a princess being saved from danger is not a protected copyright, otherwise nearly a whole genre of stories may be infringing on each other. However, specific elements, such as scenery, plot, wording, or other means of expression of that idea, can be protected. But what happens when ideas and expression are so closely linked, like a video game that matches objects together? 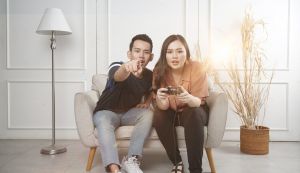 The Western District of Washington in the 9th Circuit looked at this exact issue in Spry Fox LLC v. LOLApps Inc.1 In 2011, Spry Fox, a company that makes video game apps for mobile devices, approached the defendant, 6Waves, LLC, to help develop their tile-matching game Triple Town for iOS. Eventually, the two parties entered into a nondisclosure agreement, and 6Waves was granted privileged access to Triple Town.

In December of 2011, 6Waves told Spry Fox that not only would it no longer develop an iOS version of Triple town, but it was releasing its own game called Yeti Town. The two games were at the very least within the same genre, and a 6Waves executive even claimed that Spry Fox was “not going to like [it] given its similar match-3 style.”2

The two games were indeed similar. Both games were on a six-by-six grid, and placed objects in the squares on the grid to match up. When the player placed the objects such that three identical objects connected, they merged into one “higher level” object. For example, in Triple Town, three patches of grass became a bush, three bushes became a tree, and so on. In Yeti Town, three saplings became a tree, three trees became a tent, etc. Both games had enemies in the game that tried to thwart players placing objects; in Triple Town there were bears, and in Yeti Town there were yetis. The games also had similar mechanics beyond that, such as placing traps and an in-game store.

The court used existing 9th Circuit precedent to show that a standard treatment of an idea, known as a scenes a faire, is not protectable.4 For instance, a video game about a karate tournament doesn’t prevent anyone else from making a video game where competitors wear karate garb and kick, chop, and punch. The idea of a karate tournament, like the idea of a match-3 tile game, is not protectable under copyright law as an idea.

However, the actual expressed images, such as trees, and the wording of the dialogue in the game, were protected as expressions under copyright law. The court also observed that, while titles are typically not copyrightable, the fact that the two games both have “Town” in the name was potentially relevant.

While the case was eventually settled out of court, this case still provides invaluable insight into splitting up what is and isn’t protected in video games. The court found that it was plausible that the actual objects in the game, such as trees and dialogue, could be protected, even if the underlying “match-3” idea and genre was not.

Other decisions in other Districts since 2012 echoed this exercise of separating what is and isn’t protected in games. In 2013, the Southern District of New York found that a hangman word-game book’s lettering scheme and answers to the games were not protected, but the actual drawing of the hanging stick figures were copyrightable expressions.5 Similarly, in 2016, the South District of Texas found that a card game with similar sets of abilities and number of “life points” as rules in the game did not infringe on another, similar card game.6 This was because the rules and mechanics of games were underlying ideas only entitled to very thin, literal protection of their expression.

These cases, however, all illustrate one thing: copyright doesn’t protect many of the mechanics and rules that are fundamental to the creation of video games. For copyright, what matters most is the expression of the idea, not the idea itself. While copyright is still undoubtedly an important aspect of protecting a video game’s intellectual property, it should only be one part of any prudent developer’s plan to protect their proprietary intellectual property.